Which boiler do you have? An explanation of Combi boilers, system boiler and gravity boilers

We often find that there is confusion when talking about particular boiler types and systems so it is worth giving a brief explanation of the main ones, what they do and the shortcomings of each.

A combi boiler heats the domestic hot water on demand. It has no need for a cylinder or loft tank and produces your hot water using the incoming mains pressure to push the water to the taps and showers. They are probably the best common boiler type and will run up to 3 showers simultaneously with no problem. They are sized for their DHW output rather than space heating although of course, this has to be taken into account.

No loft tanks, no immersion heater.  Mains pressure hot water.  Oil or gas….what’s not to like? 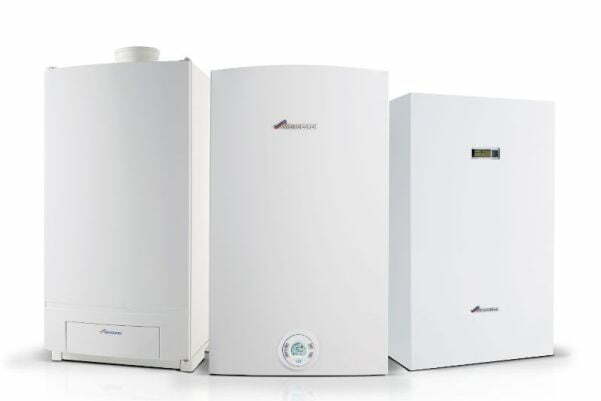 A System boiler is an upgrade on a Heat-only but is basically the same thing. It still requires a separate cylinder, will do all the Central Heating as well as Hot Water via the immersion. The difference between the two is that the system boiler has many of the peripheral components of a full system built-in, often saving some time on the installation costs.

Different types of systems and how they work

All systems will have two bodies of water which should never mix:

A system pressure gauge, often found on the front of the boiler, indicates the pressure within the closed Central Heating system. it has no relevance to your domestic water from the taps.

Gravity system from a heat-only or combi boiler

Very often your cold water supply to bathrooms will be fed from a large loft tank. The reason for the loft tank is to give you a body of water that gives enough pressure to fill a bath and run other taps. However, with this type of system, which is known as a Gravity system, you will have low pressure for both hot and cold water supplies to the taps which is usually not enough to run a decent shower. A shower pump is often used on a gravity system to boost the shower supply pressures to something acceptable. 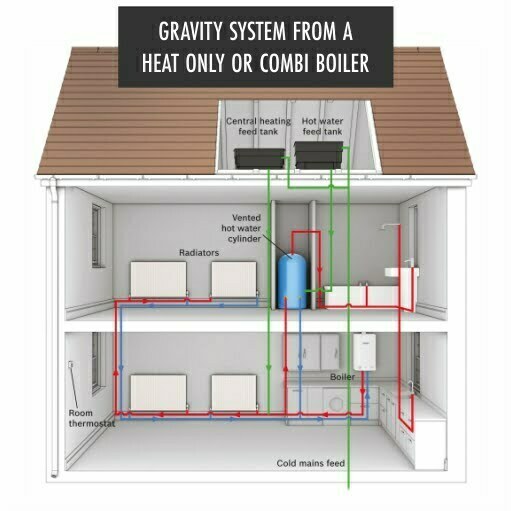 A Combi boiler has no such issues. The Combi boiler is probably the most widely used type, especially for new homes. You will see very good flow rates to all taps and showers. The incoming cold mains pressure is used to run both the hot and cold taps. The cold water is fed directly to every tap whilst the hot water is directed through a “heat exchanger” within the boiler which instantly turns it from cold to hot but still maintains the same pressure as the incoming mains supply.

The only disadvantage of a combi boiler is that it does everything… Central Heating as well as hot water and therefore, should it fail, you have nothing until it’s repaired. There is also a misconception that they can’t run a shower as well as other taps or outlets. This simply is not the case…unless you have more than three showers working simultaneously.

A correctly sized combi boiler can easily run most households and up to three showers or bathrooms so don’t be put off by anyone who is re-living the memory of a combi they had 30 years ago! Modern condensing combi’s are a vast improvement over the older generation of combi’s. 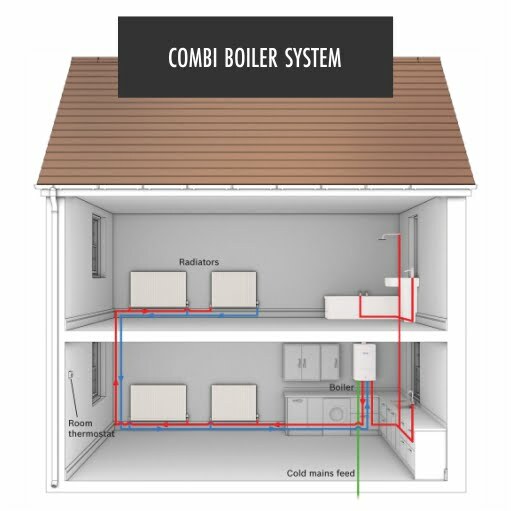 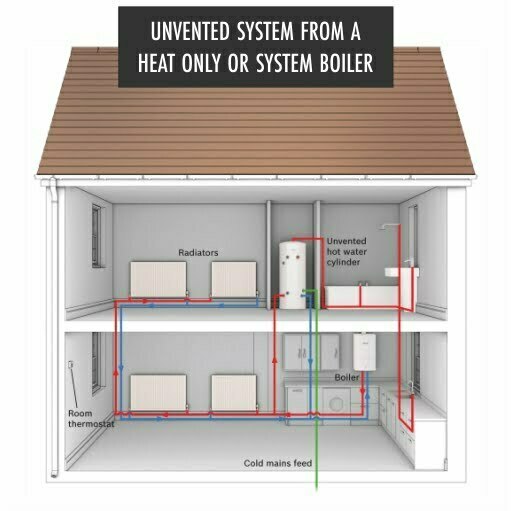 “Removal of existing oil fired boiler, installation of new gas-fired boiler, make good brickwork on exterior of the house. The survey was very thorough and informative and the advice given was easy to understand and very professional. The work was completed on the days specified and to a high standard. The two fitters were excellent, made no mess, and were a pleasure to have in one’s home. All work was completed as specified and to the agreed price which was very competitive. I would have no hesitation in recommending this company.”