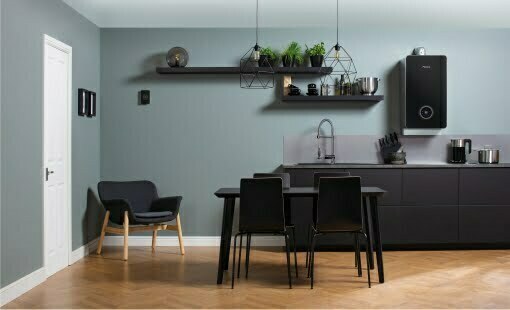 Different types of systems and how they work

All systems will have two bodies of water which shouldn’t ever mix. One body of water that is going around the radiators and heating system, and then completely separate water in the domestic hot and cold system that comes from the taps.

A system pressure gauge, often found on the front of the boiler, is indicating what the pressure is within the closed Central Heating system. It has no relevance whatsoever to your domestic water from the taps. 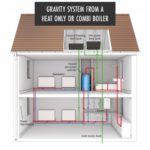 Very often you will have your cold water supply to bathrooms fed from a large loft tank. With this type of system, which is known as a “Gravity” system, you will have low pressure for both hot and cold water supplies to taps and it is usually not enough to run a decent shower. It is also important not to drink this gravity-fed water, and only drink water that is fed directly from the mains supply. (If in doubt, try holding your thumb over the cold tap, if you can stop the water easily then you are holding back a gravity-fed supply. If however, the pressure instantly blows your thumb off the end of the tap and you get a strong “blast” of water, then this is mains!)

A shower pump is often used on a gravity system to boost the shower supplies to acceptable levels. 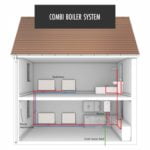 A combi boiler has no such issues as it utilises the incoming cold mains pressure to run both the hot and cold taps. The cold water is fed directly to every tap whilst the hot water is directed through a “heat exchanger” within the boiler which instantly turns it from cold to hot but still maintains the same pressure.

The only disadvantage of a combi boiler is that it does everything… central heating as well as hot water and therefore, should it fail, you have nothing until it’s repaired. There is also a misconception that they can’t run a shower as well as other taps or outlets. This simply is not the case… unless you have more than three showers working simultaneously.

A correctly sized Combi boiler can easily run most households and up to three showers or bathrooms so don’t be put off by anyone who is re-living the memory of a  combi they had 30 years ago! Modern condensing Combi’s are a vast improvement over the older generation of combi’s. 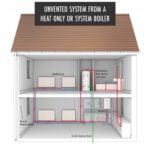 An unvented cyilinder is another type of system for delivering hot domestic water at mains pressure. To the untrained eye, they look like an immersion cylinder and indeed have many of the same characteristics. However, an unvented cylinder does not need a big loft tank to draw its water supply from, instead, it uses the incoming mains pressure as its driving force. The advantage of the unvented cylinder over a combi boiler is that if the boiler was to fail at any time, you still have the back-up of an immersion element for hot water.

It’s also worth mentioning that we can install a fully electric unvented system for domestic hot water. No need for a boiler, flue or new connections to gas or oil supplies. They work well if you have good mains pressure and can help towards the UK target on reducing carbon emissions.